At this point, I must be sounding like a broken record. At the time of writing this piece, AMC (NYSE:AMC) stock has consistently added more than $1 billion in each of the last three sessions.

Individual investors eager to save the movie theater industry are rallying behind the embattled movie theatre chain.

For all the naysayers out there, including me, who have said that AMC has a flawed business model, it is time to eat humble pie.

Retail traders showed their muscle once again, pushing the company’s market value to a record $13 billion.

It is time to rejoice if you threw caution to the wind and hopped onto AMC stock for just this kind of rally. At this point, you probably have had enough of analysts saying it is the wrong move or that you are better off investing in safer, more reliable equities.

But again, the rally does not convince me that AMC stock is a good long-term investment. Parking your capital in this company is definitely akin to gambling with your money.

So, it is important to remember the golden rule of gambling. Only gamble money you can afford to lose.

You could say much the same thing for a company like NIO (NYSE:NIO), for example. The EV maker is sometimes labeled as China’s Tesla killer and is extremely overvalued, but at least there is a sound business model, strong tailwinds, and an idea that investors can understand and rally behind underlying Nio.

The same, sadly, cannot be said for AMC, which is operating an archaic business model.

Stock markets operate very much like democracies. While U.S. stock markets are more democratic than most, with more than half of American households owning shares or investment funds, the general gist of the stock market is based around fair play.

When a company debuts on a bourse, you have to decide whether you want to commit capital based on its history, management, or outlook.

If you feel that everything looks good, you park your capital and see it grow, hopefully getting some dividend income when the enterprise grows large enough.

If you look at the above chart, the small squares tell you when AMC reported earnings, and the circles highlight the dividend announcements. As you can see, the biggest spikes did not occur due to these announcements. Instead, Redditors are in full control of the situation.

Trends like Reddit investing have turned this notion on its head. When members of 10 million strong subreddit urge users to hold onto AMC stock with “diamond hands,” they are not doing so out of respect for its fundamentals.

Motivations vary, but no one can justify AMC’s current valuation if you go by raw fundamentals. The same can be said for GameStop (NYSE:GME) stock, which is also enjoying a renaissance period courtesy of Reddit. 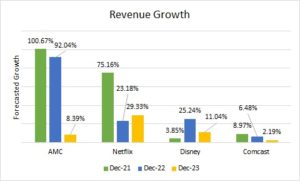 Whenever I cover AMC, I eventually end up on the topic of streaming. The reason is that instead of its peer group, AMC has more to fear from the likes of Netflix (NASDAQ:NFLX), Amazon (NASDAQ:AMZN), AT&T (NYSE:T) and Disney (NYSE:DIS).

All of these entertainment giants have their own streaming platforms, which are doing very well. The only one struggling a bit is AT&T with its HBO Max offering. However, now that it is spinning off its media assets into a separate entity, there are hopes that a stronger media unit can be established.

At the end of the day, with Netflix releasing a movie every week this year and Warner Bros. simultaneously releasing 2021 movies on HBO Max and theaters, the writing is on the wall. One only has to compare the revenue estimates for streaming giants and AMC to see where the industry is heading.

“If streaming is on the rise, then something will change. Maybe film rents will come down. Maybe prices will go up. We’ll see. But don’t just assume that people aren’t going to theaters. Because I think we’re going to find out post pandemic that people are going to go to theaters, and they’re going to be really happy that they got out of their homes to do so,” the Aron said.

That statement makes sense. There is bound to be a large section of the audience itching to go back and see their favorite films in theatres. But will that be a secular trend? I do not think so.

Tempting but Better to Stay Away

Can you make money by following the r/WallStreetBets forum and investing in stocks like GME and AMC? Yes, that is a possibility, but you also stand to get burned quite badly if things go sideways.

Although the trajectory is generally upward, there have been several steep peaks and valleys since last year. These rallies and subsequent price drops are not for the faint-hearted.

More importantly, these oscillations are not tied to company performance. In such a situation, it would be best if you take advantage of safe stocks that are trading at a discount.

On the date of publication, Faizan Farooque did not have (either directly or indirectly) any positions in the securities mentioned in this article. The opinions expressed in this article are those of the writer, subject to the InvestorPlace.com Publishing Guidelines.

Faizan Farooque is a contributing author for InvestorPlace.com and numerous other financial sites. Faizan has several years of experience analyzing the stock market and was a former data journalist at S&P Global Market Intelligence. His passion is to help the average investor make more informed decisions regarding their portfolio.