Among the public market debuts that occurred over the past year or so, Opendoor Technologies (NASDAQ:OPEN) may be among the most fortuitous. Initially, the novel coronavirus pandemic suggested that nothing related to real estate would be worthwhile, which of course clouded Opendoor. But because of the public health crisis, OPEN stock became one of the most compelling risk-on trades.

As you may recall, Opendoor specializes in combining connectivity solutions and artificial intelligence to take the stress out of the home buying and especially selling process. On the latter end, those who want to move from one place to another have logistical hurdles to overcome. Basically, you don’t want to sell your home before you’re ready, causing a nightmarish scenario. But also, you don’t want to sell too late; otherwise, you’re paying two mortgages.

Through Opendoor’s distinct (though not necessarily unique) platform, you can sell instantly to Opendoor but move out on your schedule. Also, you have the option of listing with Opendoor, which should help you save on fees. With the chaos that the pandemic created, the narrative for OPEN stock suddenly brightened.

As well, the underlying company offered a viable alternative to the homebuying process. At the start of the pandemic, the situation appeared apocalyptic. However, buyers came out in droves, bidding up home valuations to ridiculous levels. With Opendoor, the company provided its clients with a capital-backed solution, making their offers as good as cash.

Thus, on every front, Opendoor had a technology-driven answer, which bolstered OPEN stock. At its peak on Feb. 11, 2021, the shares were just a few cents shy of closing at $36. But as you can see from the chart today, that narrative changed for the worse. 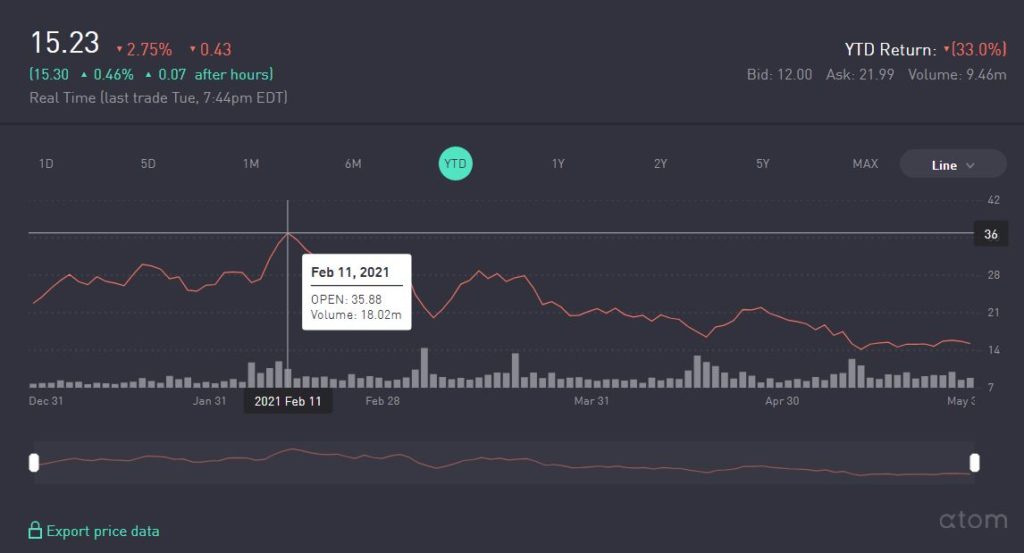 OPEN Stock Getting a Reality Check

With OPEN stock languishing between $14 to $16 over the past few weeks, we have two schools of thought. Either this is a discounted opportunity or this is a troubled name to avoid.

At this point, I’m leaning toward the latter. That’s not to say that Opendoor is a bad company, because it’s not. Rather, I think the housing market is mathematically stretched beyond its limits.

Immediately, that sentiment will draw criticism from many investors, particularly those in the real estate industry. You’ll often hear that this situation is different from the last housing bubble because homeowners today are financially much stronger. Further, housing advocates point to chronically low inventory and suggest that this will continue to boost home prices.

Really? I’m beginning to believe that the inventory argument is overplayed because we’re already sitting on massive inventory. One of the main reasons for the shortage is that Covid dampened appetites to move. Now that the crisis is abating, more people will feel comfortable putting their homes up for sale because guess what? People and their circumstances change.

Now, homeowners are indeed stronger than they were in the last housing crisis so you probably won’t see a wave of foreclosures. But you have to think about this: money or commodities of value is a finite resource. Therefore, if we see an influx of extreme demand like we did over the trailing year, this means that future demand (say in 2022, 2023) will almost surely decline.

In other words, people who would have been buyers in 2022 decided to push up their purchasing schedule to last year and this year, leaving a future demand gap. And that suggests that the financial performance underlining OPEN stock over the past few quarters is about as good as it will get.

The Context of That Quarterly Report

As my InvestorPlace colleague Alex Sirois mentioned in his analysis of OPEN stock, its first quarter earnings report left observers with mixed feelings. Yes, Opendoor delivered resounding revenue growth compared to Q4 2020. But against the year-ago comparison, it was not flattering in the least.

Some might assume that OPEN stock stumbled because of that negative optic. However, I like to think that it’s what I mentioned above. Astute investors know that markets — whether equities, housing or freaking cryptocurrencies — never go up indefinitely. Therefore, if Opendoor is posting negative growth in Q1 2021, what will Q1 2022 or 2023 look like?

If indeed future demand has been pushed up as I suspect, this will be the housing equivalent of robbing Peter to pay Paul. Things might look amazing now but it will only worsen later as the housing market cools from its heady Covid days. That’s a risk that apparently, many investors don’t want to take.

And for what it’s worth, I don’t blame them.

On the date of publication, Josh Enomoto did not have (either directly or indirectly) any positions in the securities mentioned in this article. The opinions expressed in this article are those of the writer, subject to the InvestorPlace.com Publishing Guidelines.