The bulls are completely in charge of Wall Street since the pandemic bottom last year. But in spite of the indices setting records, there are some stocks lagging now. Cannabis in general is a sector struggling of late. Tilray (NASDAQ:TLRY) stock has been in a downward spiral since February. From high to low it fell 80% following the GameStop (NYSE:GME) super spike.

These artificial mega-rallies are disruptive especially that this was TLRY’s second. At its lowest last month it was 95% below its 2018 all time high. It has had strong showings but the bulls have failed to hold the levels. The sympathy action from the Reddit meme stocks is detracting from the company’s efforts.

The Cannabis sector is trying to establish themselves as a legitimate investment thesis. Social media shenanigans are working against that effort. TLRY finally closed on the merger with Aphria and now is a more formidable foe. Management has skills, because they did this while their product is still illegal in the United States.

In my last article in April, I suggested that TLRY stock had stronger support below. The test of that opinion is ongoing now, because the price has fallen into it. Back then I had suggested selling puts instead of buying shares. That trade is still working well, and now investors have a decision to make. Should they stay long for the long haul, or actively trade around the action.

I don’t fault the fans willing to stick it out — after all, the game hasn’t even legally started.

The cannabis trade will benefit from the legalization headline. However I warn against the possibility that the easy money played out already. Wall Street has a way of looking far out in advance and may have already factored the effect of President Joe Biden’s priorities and plans in.

Fundamentally, Tilray stock is doing relatively okay. Revenues are growing and net income is somewhat stable. It still loses money but the price-to-sales ratio is under 15. Buyers today have realistic expectations without a lot of hopium in it. It will be harder to spook them out of their positions.

Besides, the 25% June correction may have already shaken out the weak hands.

It is important for the bulls to maintain a positive ascending trend of higher-lows. For that to happen the stock price needs to stay above $16 per share. Otherwise there could be another retest of the May lows.

TLRY Stock Is a Winner Over Time 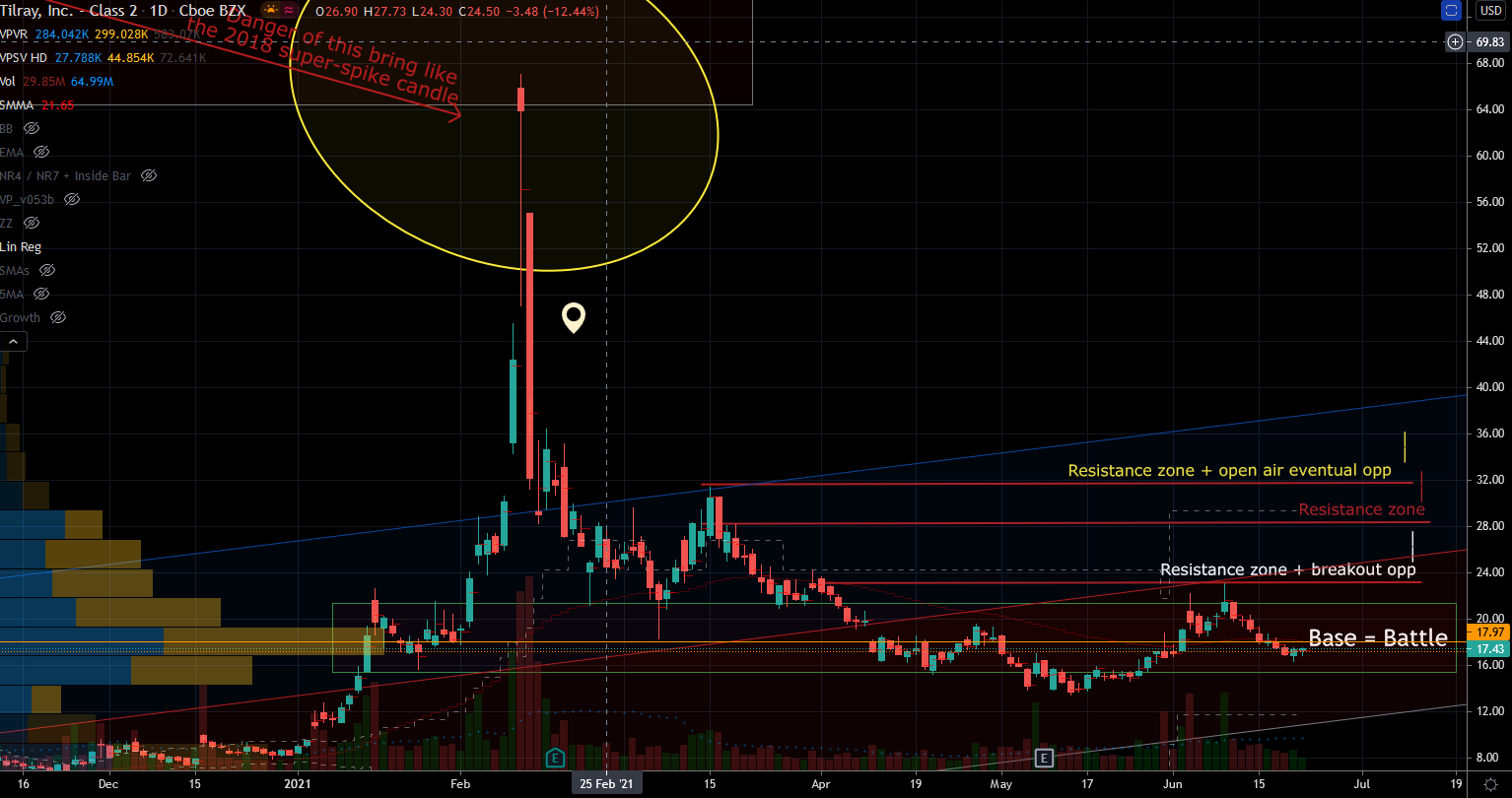 Left alone I trust that things will work out well. However, I have some concerns stemming from the overall macroeconomic conditions. The indices are setting blistering records with the help of a massive stimulus effort. The Federal reserve hinted last week that this could be ending sooner than later. The White House also looks like it is unwinding its programs, so we could suffer a sugar high crash.

Stocks have been rising with gale-force tailwind from trillions in government programs. I worry about what could replace them and how will the markets react in their absence. Fundamentally there’s nothing wrong, but technically there could be a big pothole while investors adjust.

By rule, I have infused an extra notch of doubt in all of my trades this year. I am confident that I will survive missing out on a few upside ticks. Conversely I refuse to be a victim to a gigantic blind side like in 2008. In the very long term TLRY stock is more likely than not going to have better days. Owning some of it now is fine as long as investors leave room for error.

On the date of publication, Nicolas Chahine did not have (either directly or indirectly) any positions in the securities mentioned in this article. The opinions expressed in this article are those of the writer, subject to the InvestorPlace.com Publishing Guidelines.

Nicolas Chahine is the managing director of SellSpreads.com.

Alibaba Stock Is a Roaring Tiger Again
8 Best Funds for Regular Dividend Income
How COVID-19 Changed Our Saving and Spending Habits
Which E-commerce Stock Does Wall Street Currently Favor?
The 7 Worst Stocks to Buy in a Bear Market