Attention Churchill Capital Corp IV (NYSE:CCIV) shareholders: now’s a good time for a low-key flex. After a painful crash from an almost $60 high, CCIV shares are finally moving in an upward direction. In fact, CCIV stock is up 18% over the past 30 days.

Social media is on fire celebrating the sheer gorgeousness of the Lucid Air (yes, it’s gorg). People are infatuated — almost blinded — by the brand’s ultra-fancy Beverly Hills and Chelsea showrooms. Oh, and don’t forget “Lucid Nation’s” most glorious day (July 23) is just around the corner! If you weren’t already aware, that’s when CCIV becomes LCID.

With the stock gaining ground, some of the more passionate members of Lucid Nation have highlighted their recent gains. They’ve even taken the time to tell me that my negative call on CCIV stock is nonsense.

That’s OK. My position on the stock hasn’t changed: I’d sell into strength.

Amid all the excitement, there’s still room for some real talk here right? I hate to crash the party, but let’s set our differences aside here for a moment, CCIV bulls. Remember to make sure you know who’s on the other side of a momentum trade.

Time and time again, stocks trade up fast on momentum, only to see sharp reversals once the market pulls out its measuring stick. So, how exactly do we measure the real value of a company that has no revenues and volume production?

With 22% of the float short and a lockup coming up on Sept. 1, don’t wait too long to find out.

CCIV shareholders finally have a catalyst: Lucid Motors will soon become a public company. But that’s also when, quite literally, the rubber meets the road.

First, here’s the good news. Lucid is pleased with its initial quality validation prototypes and still targets production of 557 cars in late 2021. There also seems to be a lot of interest.

In fact, CEO Peter Rawlinson confirmed 10,000 reservations for the Dream. Customers are plunking down as much as $7,000 for a spot on the waiting list. That’s certainly a good indicator of interest, especially for a $161,500 car. For the record, Rivian Automotive claims 30,000 reservations for its electric SUV.

But, if we’ve learned anything from the blow-up at Lordstown Motors (NASDAQ:RIDE), it’s to take numbers like these with a grain of salt.

Is Anyone Actually Doing the Math Here?

With electric vehicles poised to cannibalize a $5 trillion global automotive industry, there’s more than enough room for a second player to take a bite out of Tesla (NASDAQ:TSLA). Tesla’s current $682 stock price also makes it prohibitively expensive for many retail investors — another reason why Lucid’s story is so compelling right now.

It’s this desire to find the “next Tesla” that’s responsible for much of the recent move in CCIV stock. In fact, the 18% move in CCIV shares over the past month isn’t based on any incremental information. Within CCIV social media circles, the talk is purely deal speculation and excitement. All of that’s amplified with a well-timed publicity blitz. (Hats off to Nathan Rawlins, Lucid’s Chief Marketing Officer, who has run successful campaigns at companies such as Jive Software).

As a long-term, fundamentals-based investor, this is how I think about momentum. Upward ‘mo is a good thing … until it isn’t.

At a certain price, any stock will fail to keep up with its expectations. Just quickly scanning through the ridiculously hot special-purpose acquisition company (SPAC) world, we can see a long list of self-proclaimed “game changers.” Almost all of these have met their (market) maker.

Take SPAC poster child and Cathie Wood favorite Opendoor Technologies (NASDAQ:OPEN) for example. This company promised to change the real estate market. It didn’t. (Side note: If you want to play here, buy Zillow (NASDAQ:Z) instead).

History often repeats itself, or at least rhymes — especially when the stakes are high. So, if you’re trading on CCIV momentum, make sure you know how to separate the story from the stock.

Here’s a place to start. Based on CCIV’s June 11 S-4 filing, Lucid’s share count will be approximately 1.6 billion shares. At today’s price of $28.90, that implies a $46 billion market capitalization.

Now, let’s try and measure this implied valuation against some real numbers. The trouble is, we really can’t do that at all. Lucid’s revenues are zero and we don’t have any credible projections — other than what’s included in CCIV’s initial filing.

Given regulator scrutiny around ambitious SPAC revenue projections, investors may want to exercise caution before banking on these numbers. It’s potential regulatory scrutiny — not humility — that leaves the typically loquacious Rawlinson terse when asked about sales projections. 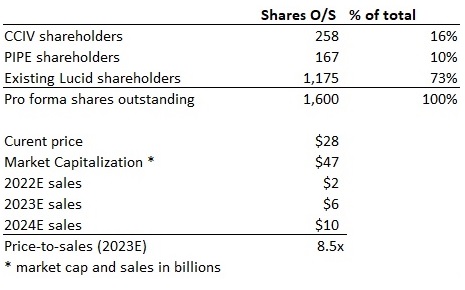 Lucid’s estimates are undoubtedly very ambitious. The company cited vehicle deliveries of over 250,000 in 2026 that could translate into nearly $22.8 billion in revenue that year. (Remember, none of these printed numbers have been confirmed by the company).

For fun, let’s apply our own baseline projections. Assuming that in 2023 Lucid sells 35,000 EVs at an average selling price (ASP) of $170,000 each, the company would generate $6 billion in sales. Looking at these numbers on a relative basis, $6 billion in sales is just 7% of the $82 billion consensus estimate for Tesla in the same year. But, considering it took Tesla 10 years to make 500,000 vehicles, that’s a steep ramp.

It’s worth noting that Lucid — like every carmaker before it — faces significant execution risk in achieving this steep of an automotive production ramp.

The Bottom Line on CCIV stock

Even if we can get behind these numbers, the reality is that Lucid trades at a whopping multiple of 8.5x 2023 sales. That makes Lucid a pre-revenue company that’s more expensive than Tesla, which currently trades at estimated 8x 2023 sales.

Momentum has stretched this stock beyond its fundamentals.

While I remain bullish on Tesla, it’s important to give credit where it’s due. CCIV bulls can celebrate better gains than TSLA over the past month.

The problem is that this move isn’t based on any fundamental increase to revenue or cash flow. How do you convert reservations to revenues? Can Lucid produce 20,000 cars in its first year without a hitch?

We can all appreciate Lucid’s shiny showrooms. But what does the high cost of manufacturing, expensive real estate and glitzy marketing do for cash flow and earnings?

CCIV stock has had a nice recent move. But, starting very soon, the stock will need to start measuring up.

Your comments and feedback are always welcome. Let’s continue the discussion. Email me at jmakris@investorplace.com.

On the date of publication, Joanna Makris did not have (either directly or indirectly) any positions in the securities mentioned in this article. The opinions expressed in this article are those of the writer, subject to the InvestorPlace.com Publishing Guidelines.

Joanna Makris is a Market Analyst at InvestorPlace.com. A strategic thinker and fundamental public equity investor, Joanna leverages over 20 years of experience on Wall Street covering various segments of the Technology, Media, and Telecom sectors at several global investment banks, including Mizuho Securities and Canaccord Genuity.